Malayalam is a highly inflectional and agglutinative language. This has posed a challenge for all kind of language processing. Algorithmic interpretation of Malayalam’s words and their formation rules continues to be an untackled problem.  My own attempts to study and try out some of these characteristics was big failure in the past. Back in 2007, when I tried to develop a spellchecker for Malayalam, the infinite number of words this language can have by combining multiple words together and those words inflected was a big challenge. The dictionary based spellechecker was a failed attempt. I had documented these issues.

I was busy with my type design  projects for last few years, but continued to search for the solution of this problem. Last year(2016), during Google summer of code mentor summit at Google campus, California, mentors working on language technology had a meeting and I explained this challenge. It was suggested that I need to look at Finnish, Turkish, German and such similarly inflected and agglutinated languages and their attempts to solve this. So, after the meeting, I started studying some of the projects – Omorfi for Finnish, SMOR for German, TRMorph for Turkish. All of them use Finite state transducer technology.

I will document the system in details later. Currently it is progressing well. I was able to solve arbitrary level agglutination with inflection. Nominal inflection and Verbal inflections are being solved one by one. I will try to provide a rough high level outline of the system as below.

What it can do now? Following screenshot is from its web demo. You can see complex words get analysed to its stems, inflections, tense etc. 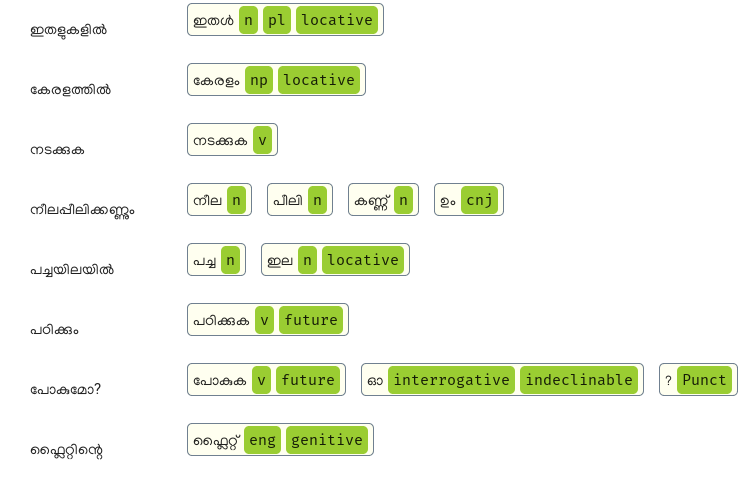 Note that this is bidirectional. You can give a complex word, it will give analysis. Similarly when you give root words and POS tags, it will generate the complex word from it. For example:

Covering all possible word formation rules for Malayalam is an ambitious project, but let us see how much we can achieve. Now the effort is more on linguistic aspects of Malayalam than technical. I will update about the progress of the system here.