The reformed or simplified orthographic script style of Malayalam was introduced in 1971 by this government order. This is what is taught in schools. The text book content is also in reformed style. The prevailing academic situation does not facilitate the students to learn the exhaustive and rich orthographic set of Malayalam script. At the same time  they observe a lot of wall writings, graffiti, bill-boards and handwriting sticking to the exhaustive orthographic set.

The sign marks for the vowels ഉ and ഊ (u and uː) have many diverse forms in the exhaustive orthographic set when joined with different consonants. But in the reformed style they are always detached from the base consonant with a unique form as ു and ൂ respectively for the vowel sounds u and uː. Everyone learns to read both of these orthographic variants either from the school or from everyday observations. But while writing the styles, they often gets mixed up as seen below. 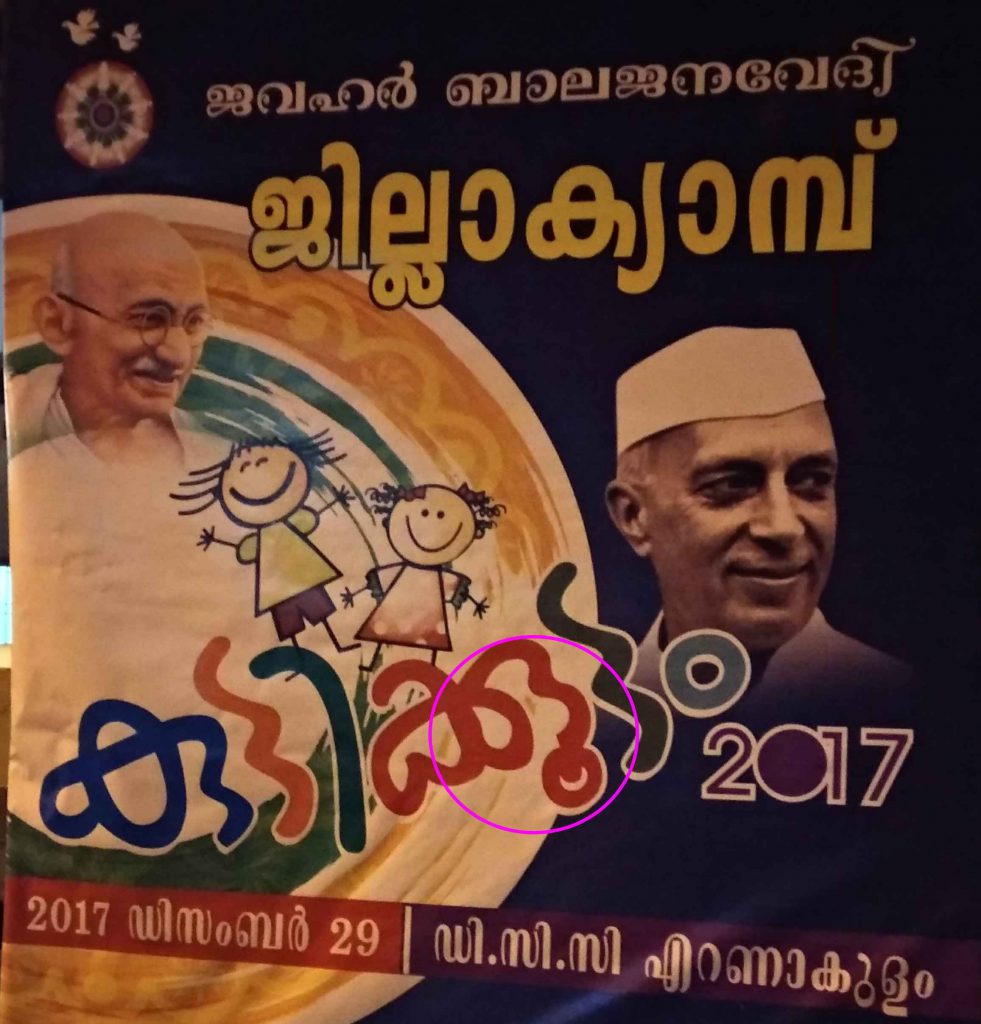 Redundant usage of vowel sign of u is indicated in circle

In this blog post I  try to consolidate the vowel signs of u and uː referring to early script learning resources for Malayalam.

There are 37 consonants and 15 vowels in Malayalam (additionally there are less popular consonant vowels like ൠ, ഌ and ൡ). Vowels have independent existence only at word beginnings. Otherwise they appear as consonant sound modifiers, in form of vowel signs. These signs often modify the glyph shape of consonants and this is a reason for the complex nature of Malayalam script. These marks can get distributed over the left and right of the base consonant. See the table below: 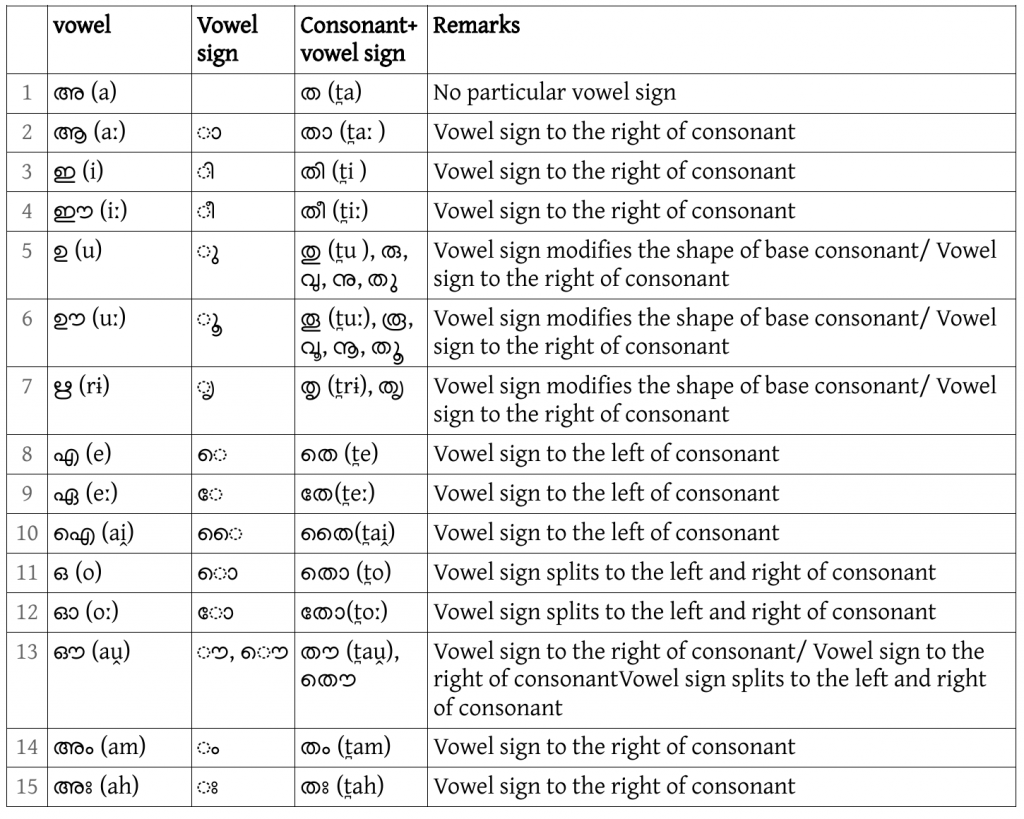 As seen in the table, the signs ു, ൂ, ൃ ([u] ,[uː], [rɨ] ) changes the shape of the base consonant grapheme. It was not until the 1971 orthographic reformation these signs got detached from the base grapheme. You can see the detached form as well in the rows 5,6 and 7 of the above table.

In the exhaustive script set of Malayalam there are in fact 8 ways in which ‘ു’ [u] and ‘ൂ’ [uː] sign marks change the shape of base consonant grapheme. These 8 forms (u- 4 forms and uː – 4 forms) are consolidated below. 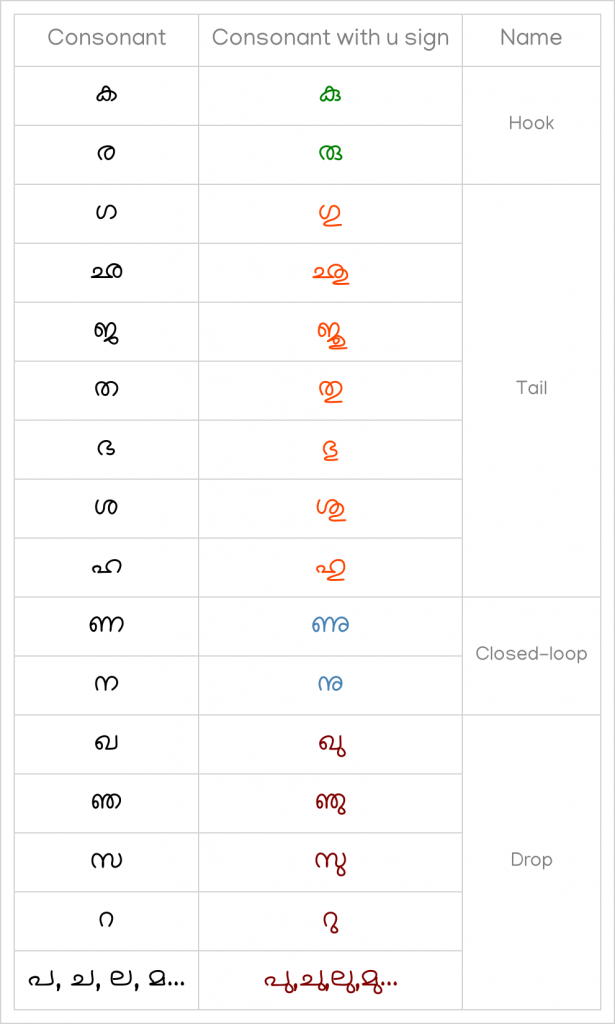 ‘ു’ [u] sign induces 4 types of shape variations to base consonant. 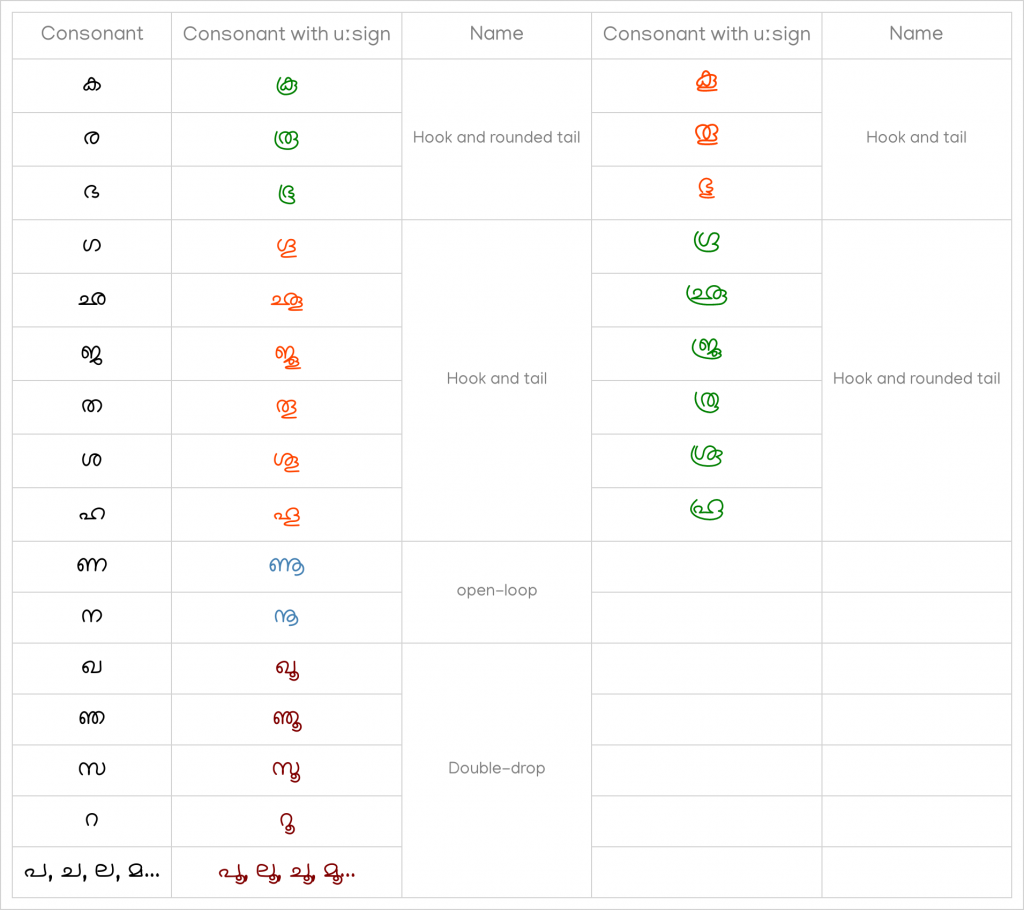 ‘ൂ’ [uː] sign induces 4 types of shape variations to base consonants.

Note: The sign shape names drop, double-drop, hook, hook and tail, hook and rounded tail, tail, closed loop and open loop are author’s own choice. Hence there is no citations to literature.

Modern textbooks do not detail the ‘ു’ [u] and ‘ൂ’ [uː] vowel sign forms. The earliest available reference to the script of Malayalam and its usage is the book from 1772, Alphabetum grandonico-malabaricum sive samscrudonicum.It was a text book meant to be used by western missionaries to Kerala to learn the Malayalam script and its language of description is Latin. Alphabetum describes various vowel sign forms but it does not give any indication on the hook and tail form. ക(ka) , ര(ra), ഗ(ga), ഛ(ʧʰa), ജ(ʤa), ത(t̪a), ഭ(bʱa), ശ(ʃa), ഹ(ɦa) etc. uses the hook and rounded tail form only. This being the first ever compilation of Malayalam script usage, that too by a non-native linguist, there are chances for unintended omissions about which I am not sure of. 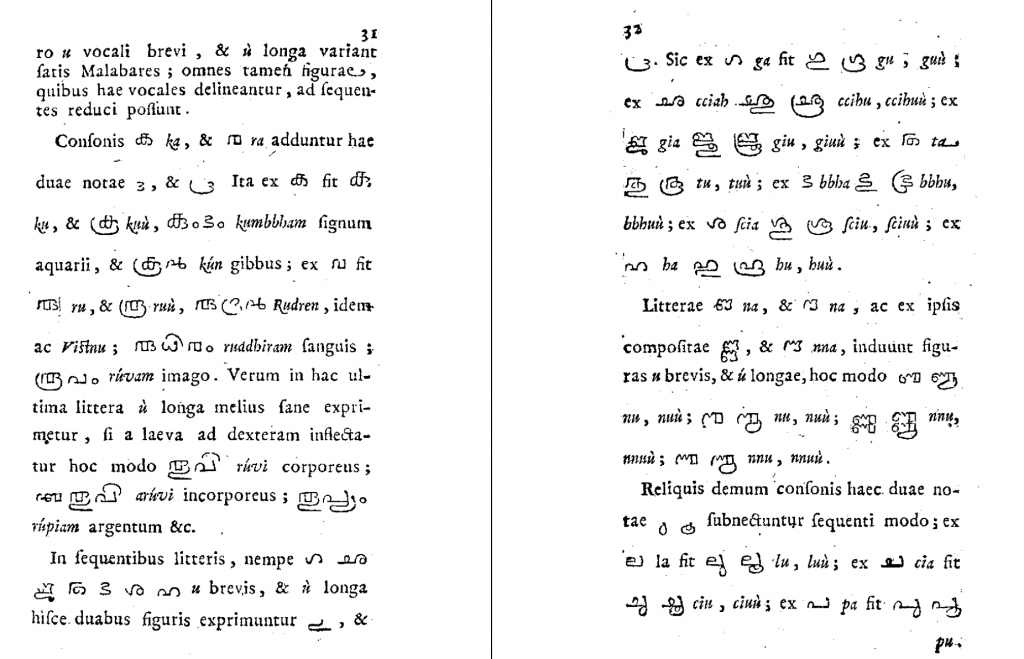 Excerpt from Alphabetum grandonico-malabaricum sive samscrudonicum describing the usage of ‘ു’ [u] and ‘ൂ’ [uː] signsA still later work in this regard was done by Rev. George Mathan, almost a century later to Alphabetum. He introduces drop/double drop for ‘ു’ [u]/ ‘ൂ’ [uː] as the common sign form and all others shapes are indicated as exceptions. He clearly mentions about the two alternate forms of hook and tail as well as hook and rounded tail in his book on the Grammar of Malayalam. 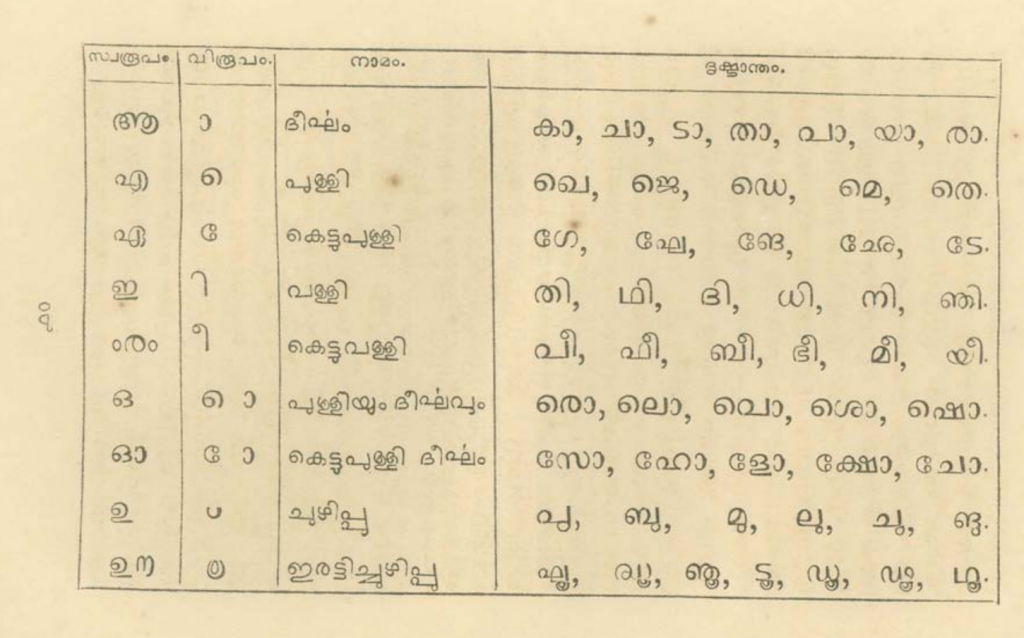 The early attempts to describe the script of Malayalam with all its complexity is seen in these books in the initial days of printing era. Much later, in 1971 reformed script orthography was introduced to the language and culture aiming at overcoming the technological limitation of Malayalam typewriters. But the language users never abandoned the then existing style variants. Now we see around us a mix of all these styles.

Note: This is a translation of an earlier blog post written in Malayalam