My first attempt to develop a spellchecker for Malayalam was in 2007. I was using hunspell and a word list based approach. It was not successful because of rich morphology of Malayalam. Even though I prepared a  manually curated 150K words list, it was nowhere near to cover practically infinite words of Malayalam. For languages with productive morphological processes in compounding and derivation that are capable of generating dictionaries of infinite length, a morphology analysis and generation system is required. Since my efforts towards building such a morphology analyser is progressing well, I am proposing a finite state transducer based spellchecker for Malayalam. In this article, I will first analyse the characteristics of Malayalam spelling mistakes and then explain how an FST can be used to implement the solution.

What is a spellchecker?

If the word is misspelled, the system need to give correction. To generate the correctly spelled words from a misspelled word form, an error model is needed. The most common error model is Levenshtein edit distance. In the edit distance algorithm, the misspelling is assumed to be a finite number of operations applied to characters of a string: deletion, insertion, change, or transposition. The number of operations is known as ‘edit distance‘. Any word from the known list of words in the language, with a minimal distance is a candidate for suggestion. Peter Norvig explains such a functional spellchecker in his article “How to Write a spelling corrector?“

There are multiple problems with the edit distance based correction mechanism

The problems with hunspell based spellchecker and Malayalam

Hunspell has a limited compounding support, but limited to two levels. Malayalam can have more than 2 level compounding and sometimes the agglutinated words is also inflected. Hunspell system has an affix dictionary and suffix mapping system. But it is very limited to support complex morphology like Malayalam. With the help of Németh László, Hunspell developer, I had explored this path. But abandoned due to many limitation of Hunspell and lack of programmatic control of the morphological rules.

Malayalam uses an alphasyllabary writing system. Each letter you write corresponds to the grapheme representation of a phoneme. In broader sense Malayalam can be considered as a language with one to one  grapheme to phoneme correspondence. Where as in English and similar languages, letters might represent a variety of sounds, or the same sounds can be written in different ways. The way a person learns writing a language strongly depends on the writing system.

In Malayalam, since there is one and only one set of characters that can correspond to a syllable, the confusion of letters does not happen. For example, in English, Education, Ship, Machine, Mission all has sh sound [ʃ]. So a person can mix up these combinations. But in Malayalam, if it is sh sound [ʃ], then it is always ഷ.

I must add that the above classification is not based on a systematic study of any test data that I can share. Ideally, this classification should done with real sample of Malayalam written on paper and computer. It should be then manually checked for spelling mistakes, list down the mistakes and analyse the patterns. This exercise would be very beneficial for spellcheck research. In my case, even since I released my word list based spellchecker, noticing spelling errors in internet(social media, mainly) has been my obsession. Sometimes I also tried to point out spelling mistakes to authors and that did not give much pleasant experience to me 😁 . The above list is based on my observation from such patterns.

Out of lexicon words

Compared to the finite set word list, the FST based morphology analyser and generator system covers large number of words using its generation system based on morpho-phonotactics. For a discussion on this see my previous blog post about the coverage test. Since every language vocabulary is a dynamic system, it is still impossible to cover 100% words in a language all the time. New words get added to language every now and then. There are nouns related to places, people names, product names etc that is not in the lexicon of Morphology analyser. So, these words will be reported as unknown words by the spellchecker. Unknown word is interpreted as misspelled word too. This issue is a known problem. But since a spellchecker is often used by a human user, the severity of the issue depends whether the spellchecker does not know about lot of commonly used words or not. Most of the spellcheckers provide an option to add to dictionary to avoid this issue.

As part of the Morphology analyser, the expansion of the lexicon is a never ending task. As the lexicon grows, the spellchecker improves automatically.

To provide spelling suggestions, the FST based morphology analyser can be used. This is a three step process

One thing I observed from the above approach is, in reality the candidate words after all the above steps for Malayalam is most of the time one or two. This make step 3 less relevant. At the same time, an edit distance based approach would have generated more than 5 candidate words for each misspelled word. The candidates from the edit distance based suggestion mechanism would be very diverse, meaning, they won’t have be related to the indented word at all.  The following images illustrates the difference.

Spelling suggestion from the morphology analyser based system.

Usually the spellchecking and suggestion are done at one word at a time. But if we know the context of the word, the spellchecking will be further useful. The context is usually the words before and after the word. An example from English is “I am in Engineer”. Here the word “in” is a correct word, but with in the context, it is wrong. To mark the word “in” wrong, and provide ‘an’ as suggestion, one approach is ngram model of part of speech for the language. In simple words, what kind of word can appear in between a known kind of words. If we build this model for a language, that will surely tell that the a locative POS “in” before Engineer is rare or not seen before.

The Standard Malayalam or lack thereof

How do you determine which is the “correct” or “standard” way of writing a word? Malayalam has lot of orthographic variants for words which were introduced to language as genuine mistakes that later became common words(രാപ്പകൽ/രാപകൽ, ചിലവ്/ചെലവ്), phonetic simplification(അദ്ധ്യാപകൻ/അധ്യാപകൻ, സ്വർണ്ണം/സ്വർണം), or old spelling(കർത്താവ്/കൎത്താവു്) and so on. A debate about the correctness of these words will hardly reach conclusion. For our case, this is more of an issue of selecting words in the lexicon. Which one to include, which one to exclude? It is easy to consider these debates as blocker for the progress of the project and give up: “well, these things are not decided by academics so far, so we cannot do anything about it till they make up their mind”.

I did not want to end up in that deadlock. I decided to be liberal about the lexicon. If people are using some words commonly, they are valid words the project need to recognize as much as possible. That is the very liberal definition I have. I leave the standardization discussion to linguists who care about it. 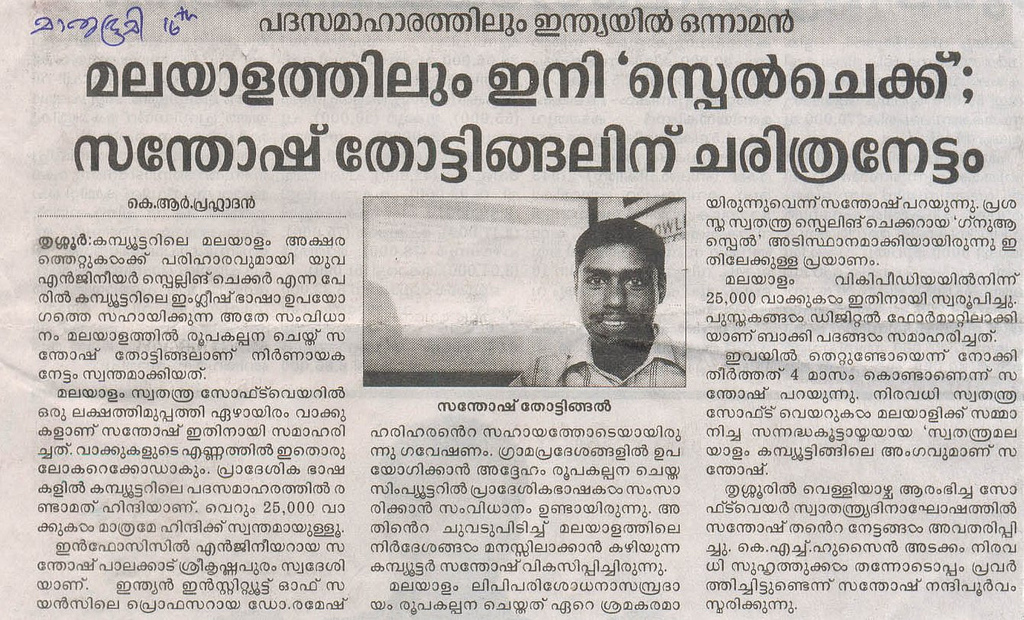 Back in 2007, when I developed the old Malayalam spellchecker, these debates came up.  Dr. P Somanathan, who helps me a lot now a days with this project, wrote about the issue of Malayalam spelling inconsistencies: “ചരിത്രത്തെ വീണ്ടെടുക്കുക:” and “വേണം നമുക്ക് ഏകീകൃതമായ ഒരെഴുത്തുരീതി“

Where can I try the spellchecker?

A screenshot of Malayalam spellchecker in action. Along with incorrect words, some correct words are marked as misspelled too. This is because of the incomplete morphology analyser. As it improves, more words will be covered.
comments powered by Disqus