I wrote about formal grammar for Malayalam conjunct in last blog post. Continuing from there, let us discuss the syllable model.

A syllable is a unit of organization for a sequence of speech sounds. Each syllable can be considered as pronounciation units that constitutes a word pronounciation. For example, “മലയാളം” has മ, ല, യാ, ളം as 4 syllables. If you ask a native Malayalam speaker, “How many letters are in the word മലയാളം?” The answer would be 4 and it corresponds to syllable count. The ‘letter’ concept, known as ‘അക്ഷരം’ in Malayalam often refers to syllables.

Along with a verbal description of syllables in Malayalam we attempt to formalize a grammar using PEG – Parser Expression grammar. That grammar is then used for writing a parser to find the syllables in a given word. A web interface is also provided to try out the system.

Before starting with definition of syllable model, we need to define some terminology.

A syllable in Malayalam can be any of the following.

You can try this in a PEG evaluator and try various conjucts to see if they all getting parsed. Use https://pegjs.org/online, copy paste the above grammar try inputs like ‘ശാസ്ത്രവിഷയങ്ങൾ’.

Characteristics of the Grammar

There are a few important characteristics of this grammar.

It does certain validations against the signs. For example, it does not allow a VowelSign, virama or anuswara after a visarga. If that happens, the parser will fail to parse a word. It permits a virama after a VowelSign, but that is only for Samvruthokaram(vowel sign = ു ).

Among the signs, you can see Virama, but it is permitted only at the end of the word. For example: അത്. If virama comes in between a word, it has the nature of consonant combining.

The order of Signs is also enforced. For example, you cannot have a virama and then VowelSign ു even though the reverse order is permitted.

Above rules creates some strictness for the parser. At the same time, there are some relaxed rules too. There is no maximum limit on a possible conjuct.  A nonsense conjunct like ‘ക്ച്ട്ത്പ്ബ്ഭ്മ്ജ്ത്ക്’ will be accepted by parser. Malayalam has valid conjuncts upto 5 as far as I know(Example: ഗ്ദ്ധ്ര്യ ). Usually the longer conjuncts will have the ending consonants as യ, ര, ല, വ.

In informal Malayalam, vowel sign duplication is sometimes used to denote elongation. For example, വാടാാാ. Our parser won’t accept that.

If you want to know syllable boundaries and don’t care about anything else, there is an easy way to find boundaries.

A syllable boundary is after:

I prepared a web interface if you just want to try out the syllable analyser and don’t want to play with PEG. 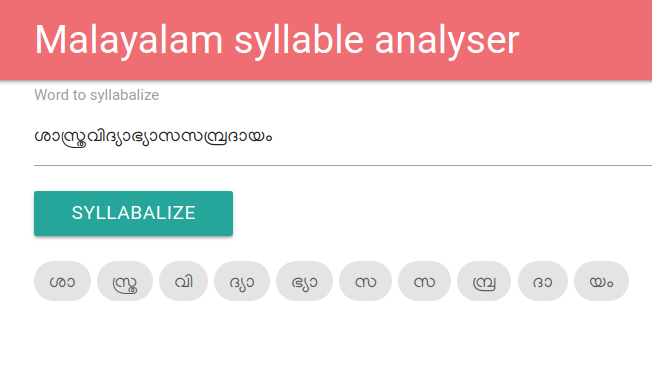 Now that comes with a JS API too, just include the following file in your web application:

Then use the following method to split a word to syllables.

I prepared a codepen project to demonstrate this.

Please report any issues or ideas to improve this model there. Thanks!